We use cookies to make sure you can have the best experience on our site. If you continue to use this site, we will assume that you are happy with it. Got It!

“It’s been a great weekend, one where we had a perfect bike and a strong pace. The idea was to save the tyres for the final leg of the race and then attack. I stayed within the group at the beginning and there were some aggressive riders, including Fabio who touched me. I miraculously managed to stay upright and when I saw that Arenas and Rodrigo were getting closer, I decided to push. It’s a great win, but we cannot relax because Bezzecchi is really strong, but we are heading into the break as leaders and that’s the most important thing” 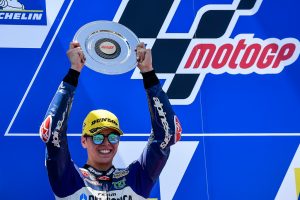 The pairing of Martin-Di Giannantonio has clinched the first goal of the season in Australia: with 31 points combined at Phillip Island between the two, Team Del Conca…